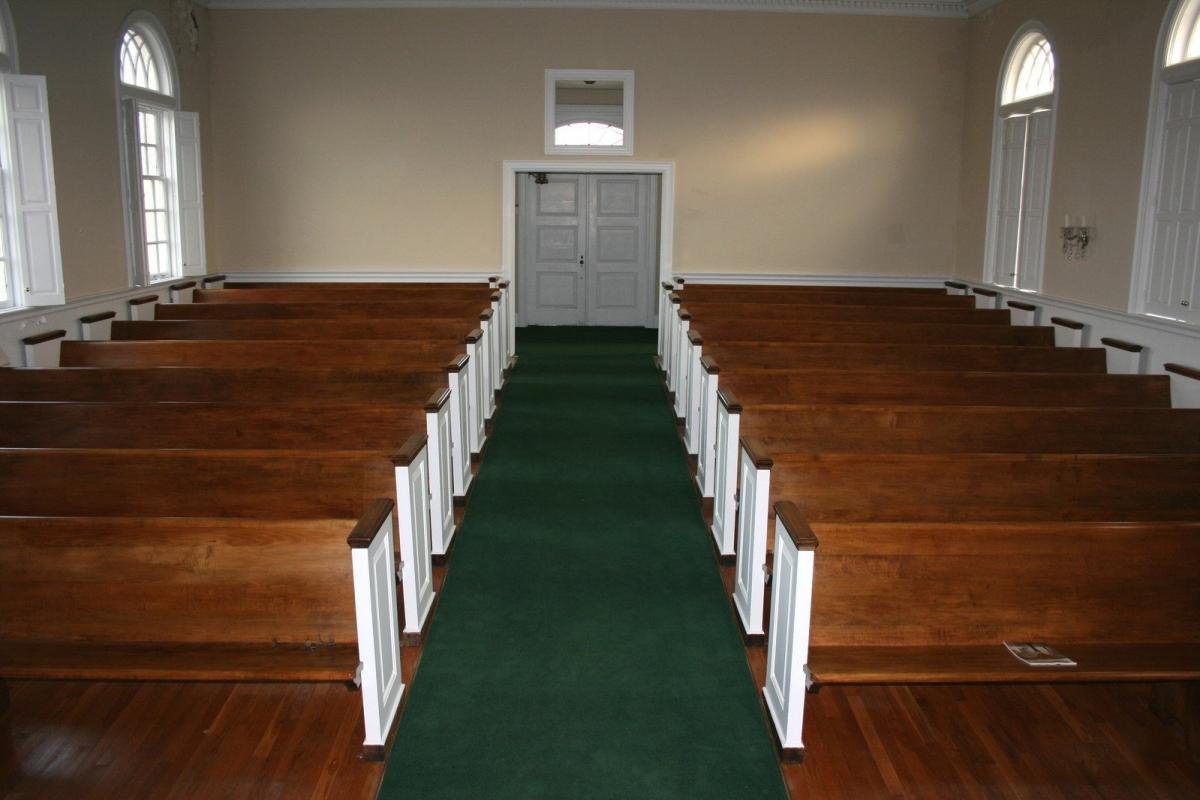 It has been almost six years since I emptied the pews of the church. I haven’t been back, and I do not see myself ever returning. There are so many of us that have left. The more of us that connect, the growing movement and the mass exodus out of toxic Christianity is spreading like wildfire. The support system of #emptythepews is massive, loving, and welcoming. We discuss our stories, heartbreaks, struggles, triggers, and most importantly the hope we’ve found outside the church doors. Leaving saved my life, and has saved countless others lives too.

Many try and point us to progressive churches. We know there are loving churches and we are grateful they exist, however, for us, the psychological triggers of anything resembling church are too damaging to our recovery. I implore everyone to truly just try and understand us ex-evangelicals and former fundamentalists.

#EmptythePews is now trending on Twitter. It was created by ex-evangelical Christopher Stroop. In a simple yet poignant statement, He began the hashtag with a tweet that reads “If you left Evangelicalism over bigotry and intolerance or this election specifically, please share your story w/the hashtag #EmptythePews. The message has resonated with so many people and the response has been overwhelming. It continues to grow and I encourage others to join the movement. 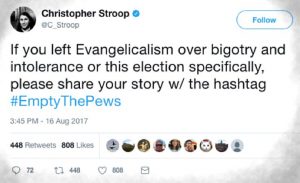 Here are my top ten reasons why I love and support #EmptythePews and hope others follow our lead and leave toxic Christianity:

1. I now can trust my own intellect.

I no longer feel like an impossible person that shouldn’t exist. I no longer have to pretend I believe things I don’t believe. I now can openly reject this sexist theology that women are beneath men in intellect, or incapable of leading and preaching. I do not suffer major cognitive dissonance as I sift through science and try and reconcile factual evidence of evolution with creationism. My brain no longer is lying to myself telling me that talking snakes are real, giants existed, Jonah spat out alive after three days of being inside the stomach of a whale, and billions of earth’s species fit onto one boat. I’ve never been able to accept any of that, among countless other illogical stories, and yet I felt so guilty and shameful that I didn’t.

2.  I no longer await the rapture.

I used to have this false hope that someday, if I was good enough, and deemed a true believer, that Jesus would come to get me and take me to heaven. I was taught to celebrate world catastrophes, rumors of wars, and natural disasters, as all of this meant Jesus is coming soon. I was taught that the world will get worse and to sit back and wait for escape. There was no need for political action or any type of movement toward progress because the earth was going to be destroyed anyway. I could sit back and relax and await the coming of Jesus. However, in my heart, I also felt an overwhelming responsibility to make sure others were saved so they wouldn’t be left behind. I didn’t want anyone to be left behind. So this false hope was riddled with guilt and a sense of pride because in leaving earth because I was good enough meant a terrible fate for my friends and other humans who weren’t Christian. Also, I was plagued with the uncertainty that I was truly a believer and what if I was left behind?

3.  I no longer fear that I will be left behind.

My childhood was spent gripping my blankets at night terrified of being left behind in the rapture. I once came home when I was six years old and no one was around. Immediately, I thought the rapture happened and God took my family and left me because I wasn’t sincere enough in believing. This fear lasted most of my life, and I cannot tell you the freedom I have now after realizing this is false theology.

People were conversion projects my entire life. I was taught to cut myself off from the world. My friendships and relationships had conditions as my sole purpose in their lives was to get them saved. If they weren’t Christian, I kept them at an arm’s length, always having this responsibility to fix them. My life is now enriched with guilt-free and conditional-free, healthy friendships with people of all religions, atheists, agnostics, sexual orientations, or any other secular label. I don’t have this sense of elitism or desire to control the outcome of my friendships. It has been life changing and truly beautiful embracing other humans and letting them in my life.

Music is one of the best things about being alive. I was steered clear away from all secular music, as it was a sin. I never listened though and hid music from my mother, and always felt guilty about my secret love for secular music and my detest for Christian rock. Jars of Clay and Amy Grant just didn’t do it for me. I really tried to love it though, for God. The true joy I felt when listening to Pearl Jam, Metallica, Nirvana, Led Zeppelin, Tori Amos, etc., was stolen from me by a “God” that condemned it. Loving these bands meant I was loving Satan. Again, I was an impossible person that shouldn’t exist. Now I can appreciate all art and human creativity without feeling like I belong in Hell.

6.  I am not self-destructive any longer.

I wasted years, a couple decades rather, being unable to love myself. Guilt, shame, and fear kept me from accepting myself because I didn’t feel accepted by God. I was never good enough. I couldn’t walk this impossible, narrow road, so I learned depression. Helplessness. Hopelessness. I abused alcohol to escape the pain. In doing so, only added to the depression because drinking alcohol was a sin, and further separated me from the love of God. Ironic that leaving religion set me free from my dependence on alcohol. Abusing alcohol has lost its appeal because I love and care about myself. I truly love me for me and accept all of my failures and weaknesses. No longer do I feel helplessness at the hand of God’s judgment or other people’s opinions. I want to make healthy choices because I care about myself and have found empowerment by finding that love within.

It saddens me to no end that this religion has caused others and myself thoughts of suicide. The shame of just being human is overwhelming. The early stages of losing this religion are riddled with thoughts and isolation as well. We can’t stay in it any longer, and yet when you find yourself on the outs, you have to embrace an entirely new identity, one that is not accepted from family or others in church culture. It takes a long time in recovery to work through the psychological damage. Looking back I cannot believe I ever let this religion or other people’s opinions of me bring myself to such a low point. There are so many other people in these same shoes. Suicides and suicide attempts are exorbitant among LGBTQ, especially if they were raised in evangelical/fundamentalist homes. Again, they feel like impossible people that shouldn’t exist.

I’ve probably said the sinner’s prayer 1000 times throughout my life. I was hoping that the more I said it, God would understand I was sincere and not send me to eternal torture. I don’t even believe in a God that would send any of his creation to eternal fire and torture. I never truly believed that and always questioned it. After all, God loves us right? I wouldn’t send anyone to hell, so why would God? Do I love others more than this God? Doubtful.

9.  I now have hope and expectation for a better world (Kingdom of Heaven) and am committed to action in bringing this about.

From policies aimed at countering climate change, furthering equality, and healthcare for all, I now am active in progressing this world toward a better future for our kids. It is up to us and it is within our capabilities to transform the earth and reduce suffering for all.

10.  I can now follow the words and teachings of Jesus outside of this institution.

Jesus spoke of loving others unconditionally. He taught healing the sick, raising the oppressed, treating others how you want to be treated, and not judging others for their “sins.” In simple terms, Jesus told us we are set free by grace, and now we can be a light unto the world and make it better for others. Watching this institution support Donald Trump has exposed this religion for what it is, a haven for greed, bigotry, nationalism, and racism. Their support of his policies and ideology are definitely anti-Christ, which is all the more reason why I hope people continue to #EmptythePews.

The fate of the world actually depends on it.

DACA and the Gospel: Jesus is a DREAMer