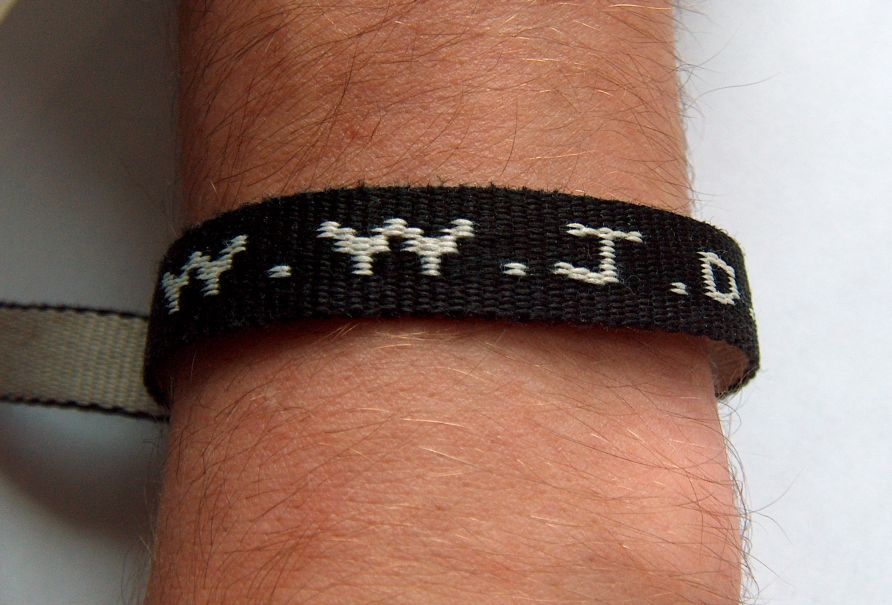 WWJD (What would Jesus do) was a popular phrase in evangelical circles in the 1990’s. It originated from a sermon given by Charles Spurgeon, a notable evangelical preacher, in 1891. In its brilliance, the phrase has lasted now well over 100 years and is a bedrock of modern evangelical Christianity. The question, what would Jesus do, causes us to look in our consciences and ask our hearts if our choices would be something that Jesus would choose. Following Jesus means we try and imitate him, his thoughts, and ways.

In the 1990’s, Janie Tinklenberg, a youth group leader at Calvary Reformed Church in Holland, Michigan, began a movement to inspire the teens in her group to remember the phrase, WWJD? when faced with difficult choices.  Soon this spread worldwide and Christian kids began wearing WWJD bracelets. This movement spread like wildfire. It was beautiful. I remember being part of the WWJD movement. It taught me that when I was faced with peer pressure, to ask myself WWJD?

Maybe it worked for some, but it never worked for me. I still engaged in all the things I wasn’t supposed to; dancing, drinking, smoking, and rounding third base (but not quite home plate). The movement had good intentions BUT entirely focused on the wrong issues. It turned Jesus into a constant guilt Fitbit, measuring your steps that counted toward being a good Christian. WWJD wasn’t so much about lifting the oppressed, but rather pushing you down in guilt. There were some beautiful elements and some toxic elements.

What if we shifted this phrase to cause us to look around the world and see the dark elements that are in play? What if we asked ourselves when observing an issue, not only WWJD, but also WWSD (What would Satan do?) I don’t necessarily believe in a literal “Satan” like I used to, or what I was taught to. However, I do believe in the principles of darkness that seek out to kill, steal, and destroy. We should be asking these questions right now in every issue we are lending our voices to. Not to push us toward guilt, but to expose the darkness, so that we may see how to shine the light in it. Darkness is nothing more than the absence of light.

My answer in its simplicity: Jesus would want us to make sure every human being was given medical care, to heal and improve life. Satan would deny humans healthcare, seeking death for the sick, and stealing life and happiness.

I implore everyone to try it with all issues facing us today such as; police brutality against black Americans, racist monuments, bombing the entire country of North Korea (including innocent men, women, and children), Puerto Rico aid, LGBTQ rights, climate change, etc.

What would Jesus do about LGBTQ?

Jesus would love them, unconditionally, and not make them feel like evil people that shouldn’t exist, or have happiness or equality.

What would Satan do about LBGTQ?

He would convince a lot of people that they are following Jesus by mistranslating his worldview, making them think LGBTQ are evil, unsaved, hellhound, immoral, and living a choice.

I have started a hashtag on twitter #WWSD, with a tweet that reads, “If you’re tired of evil being touted as Jesus, tweet something the GOP/Trump is doing with the hashtag #WWSD (what would Satan do?) 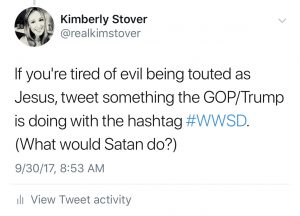 This isn’t to say that I am calling these people Satan, but they are engaging in policies that kill, steal, and destroy. Before we can start turning this around and start loving our neighbors as ourselves we must recognize the ways in which we all are engaging in the principles of darkness. We must see the log in our own eye before we can pluck the dust out of someone else’s eye. This is not meant to cause guilt or shame. We can choose to repent (change our minds) and begin to engage in the light, which is love. Never forget that it is never too late to begin again in grace and forgiveness for ourselves, and others.

In conclusion, I hope this movement WWSD grows and spreads. We need to expose the dark and we need to transform it with light. WWSD, or #WWSD on twitter, will raise awareness to issues, toxic theology, corrupt politics, and hopefully cause people to think outside the box and change their hearts to move toward love and restoration for all.
I hope you will join this new grassroots movement, WWSD?

Winter is Over. Now We Must Inspire New Life With Our Light.

Cleansing the Temple: Our work post the inauguration of Trump.