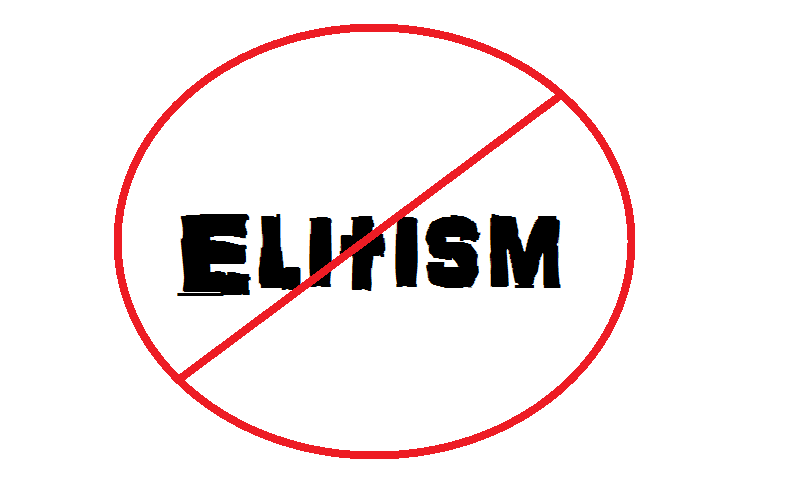 Growing up in Fundamental Christianity gave me many beautiful roots to grow from. Seeds were planted within my heart and while some withered away, others flourished with new space to bloom. The web of sprouts that died that has been most significant to me is religious elitism or the “us vs. them” mentality.

I used to view people as conversion projects. I can remember giving my friend a hard time on the bus in the fourth grade for doing her catechism homework, insisting that she was doing something wrong. I learned that my way, my church’s way, was the right way, and all others lacked in “following The Word.” I was raised with “Onward Christian Soldiers” as my anthem, and my job and duty to Christ was to witness to others, not in my sect of Christianity.

I fought it. I didn’t want to do it. I felt overwhelming guilt if I had friends that weren’t saved and I didn’t try and convert them or invite them to church. However, even though I was taught to recruit for Christ, I didn’t understand it. I used to fight with my mother constantly, asking sincere questions about other churches. I always thought it was silly that there are so many different types of churches in my town, the world, that seemed to be enemies. I never understood why they didn’t join forces and make a real difference in the community and the world. Their differences were minor to me and that type of thinking never went away and eventually broadened to include all religions and non-religious persons.

When I realized I didn’t have all the answers and when I began to see flaws inside of my own religion was when I stopped viewing others as conversion projects. Instead,  I just saw people. The fog was slow to lift – it took decades, but through constant engagement with others unlike me, the world eventually opened up and I opened up to it. Religion teaches us to cut ourselves off from the world. It teaches us that our church community is our body, Christ the head, and everyone else is wrong.

Jesus tells me to embrace the outsider. Love tells me to not insist on my own way. All of these theological differences just get in the way of being the family that we are and caring for one another. Religion divides us. Jesus unites us. Love unites us. I have loved a very diverse group of people in my life…a drag queen, a pagan, a minister, an atheist, lots of alcoholics, drug addicts, rich people, poor people, a Freemason, a Buddhist, a Wiccan, and yes, even Trump-supporting republicans. All of which has caused massive introspection and taught me valuable lessons. We are all teachers to each other.

In fundamental Christianity,  we are taught that there is one sin that is unforgivable. It is an eternal sin and is summed up with these two verses:

“Truly I tell you, people will be forgiven for their sins and whatever blasphemies they utter, but whoever blasphemes against the Holy Spirit can never have forgiveness, but is guilty of an eternal sin.” Mark 3:28-29

Earlier in the passage,  Jesus was healing people on the Sabbath (which was a sin). The Pharisees and scribes now had something to charge him with, and were conspiring on how to destroy Jesus. Later they found him and accused him of being out of his mind, possessed by demons while casting out demons. Jesus responded:

I believe the Holy Spirit is present in all of life. The Holy Spirit teaches us through all things, and all people.  If we cut ourselves off from the world, life, we are essentially blaspheming the one who is in all things. If we allow ourselves to be divided against ourselves, we cannot thrive or learn. We cannot allow elitism to quench the spirit from growing in grace and forgiveness.

We have to find a way to connect with others unlike us and not let our politics become the new religion of us vs. them. A lot of us have been on the defense for so long now, we feel we must attack or be attacked. We have felt like victims, and rightfully so. When you find yourself in the “them” category, you become so much more aware of the elitism present in fundamental Christianity. Suddenly, you find yourself on the outs. You don’t fit in. They may say you’re  backslidden, or that you have fallen away. All of these judgements hurt so badly that the only way to persevere is to speak louder in an effort to be understood.

The thing is, they may never understand. However, we can break the habit of being us. We don’t have to defend any longer. I refuse to be victimized by a religion that has proven to be unconcerned with anyone other than those in their “us” category. Everyone is in my category, and I haven’t been behaving that way.

With authority, we can fight for the least of these without attacking. We can educate instead of insult. We can expose hypocrisy without sounding like snarky intellectuals. I am not sure how exactly to walk this path, but the seed of humility was planted within me long ago, by the very religion I am attacking now. Religious elitism transformed into political elitism, neither of which I want taking space in my heart.

Leaving Las Vegas: Returning with Hope and Promise of a Better World

America in Trumpland: Top 6 lies in this Rabbit Hole