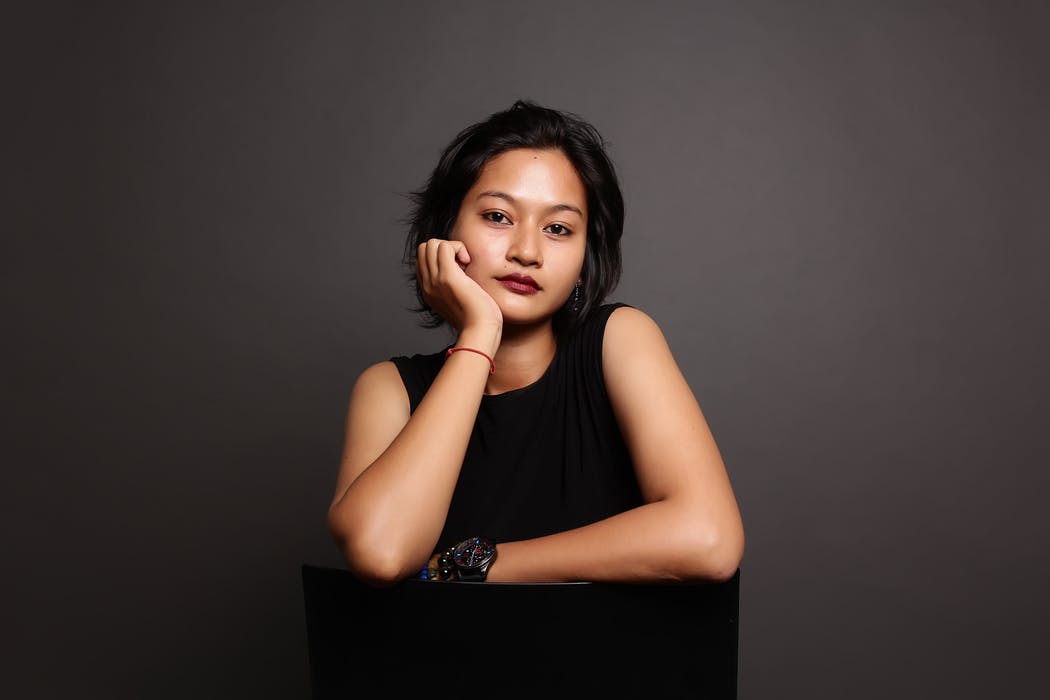 For many of us, the testimony of Dr. Christine Blasey Ford detailing her account of being sexually assaulted by SCOTUS nominee, Brett Kavanaugh, was traumatic. Deep wounds were ripped open and a nation grieved right along with Dr. Ford because for many of us, she told our story. Yet, once again we are watching the American fundamental/evangelical church choose the side of the oppressor. Once again we are experiencing complete shock and awe at our faith tradition’s refusal to hold sexual predators accountable, or at the very least support an FBI investigation.

However, what deeply concerns me, even more, are the influential evangelical leaders such as Franklin Graham, Jerry Falwell jr., and Robert Jeffress using this political sham to once again rile up their followers in religious superiority and division. For example, Jerry Falwell Jr. has basically threatened progressives now, encouraging street violence in the following tweet: 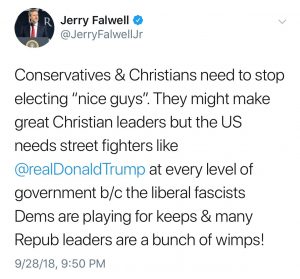 In the next tweet, Pastor Robert Jeffress is equating the left and Senator Jeff Flake with Satan: 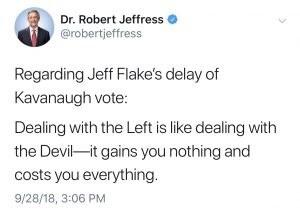 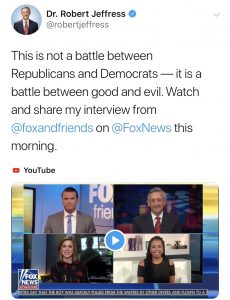 Below is an example of Franklin Graham’s incessant tweets always calling the left evil and equating progressives and social justice with evil: 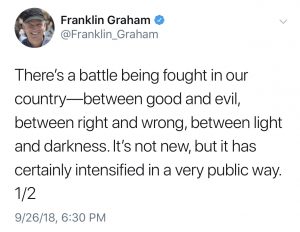 As much as I’d like to say that the words of these men are irrelevant, they are very relevant at this point in human history. Evangelical Christians are listening to them. They believe these men are sincere followers of Jesus Christ. Combine all of their words with the Nashville Statement and their newest Social Justice Statement and it’s pretty clear that they believe anyone not them is evil and therefore in a partnership with Satan.

This concerns me because it wasn’t so long ago that humans killed other humans because they weren’t Christian. Any serious inquiry into the Crusades will show that Christians can and were brainwashed and manipulated to kill other humans, not in their sect of belief. They believed they were doing the will of God. They believed their victims to be minions of the devil.

The thing is, their belief that Progressives are evil is absolutely false. I used to be an evangelical Christian, primed with this division and superiority rhetoric. I was raised to believe that anyone not my type of Christian was on the side of Satan. I was raised to believe that one day they’d all burn at the hands of the Lord while the true believers were in heaven enjoying paradise. Who could be in heaven and happy knowing other humans are being tortured, starved, and eternally burning? Sounds more like hell. Yet, that is beside the point and not nearly what this article is about.

We aren’t evil. We care about humans. We believe that social justice is loving our neighbor. We do not wish to bring the right any harm, but rather expose policies and beliefs that hurt our fellow humans, including them.

Some of us, the ex-evangelicals and former fundamentalists, sat in pews right next to them most of our lives, singing, worshipping, and learning the same scriptures. Because we see it differently, politically and/or theologically, we’ve had to leave the institution.

Our voices were not heard. Some of us have been screaming our whole lives. We had and still have important perspectives to share about walking humbly, mercifully, and justly. We heard rhetoric that didn’t fit the law of grace. We stand with the oppressed. We fight for the hurting. Yet these Christian leaders call us evil and seek to silence us?

But one thing we have in common is we all once sat next to them in the pews.

The hate rhetoric coming from influential evangelists should have everyone alarmed. The next generation of evangelicals are being indoctrinated with this hate rhetoric which is growing more extreme by the day. This is why it is so important that ex-evangelical voices are heard. We are a bridge from that world to another. We left the division for unity. We left the fear for hope. We left the side of fighting a culture war to embrace those on the margins.

How can we be heard to prevent another crusade (which is absolutely where we are headed if this rhetoric remains)?

A friend of mine in the exvangelical community, Andy Herndon, is creating a documentary focused on telling the ex-evangelical story. This documentary does not seek to bring division or hate but rather give a platform to the ones that left evangelicalism. It is a project of massive importance to society. It may heal this burning bridge as empathy is always the cure for differences. 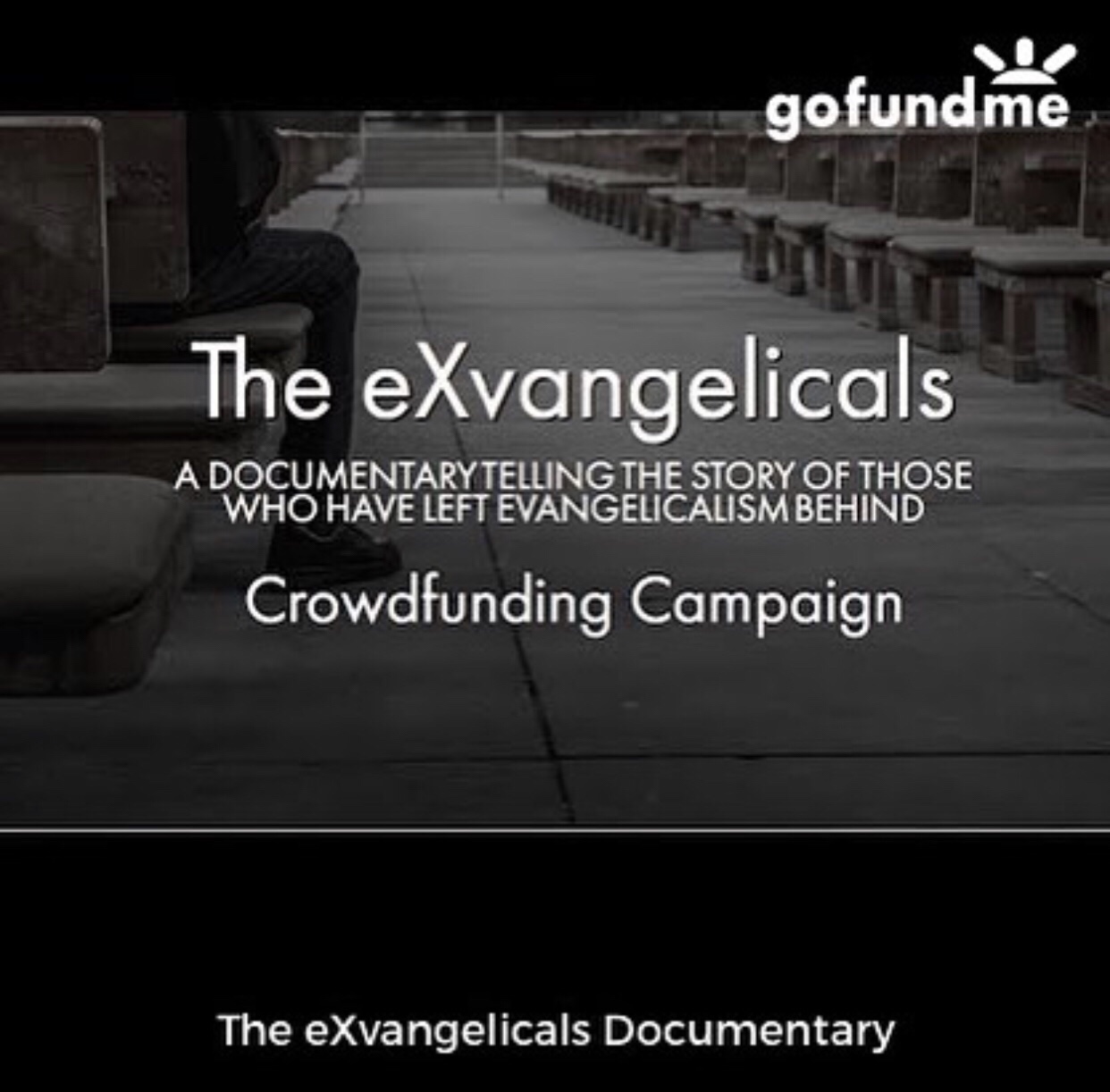 “Frankly, there isn’t anyone you couldn’t learn to love once you’ve heard their story.”

No ‘Moore’ Members Only: Club almost Elected a Child Molester to U.S. Senate

Jesus, the Artist: Man Can Corrupt Religion, Not Art.